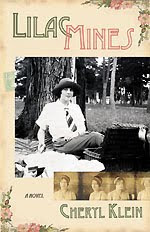 Lilac Mines was born a boomtown in the mining period of the late 1800s. Its boon was a silver mine. Lilac Ambrose was a miner’s daughter, who vanished into the mine in 1899. The novel “Lilac Mines”, Cheryl Klein’s first novel, plays out against the backdrop of uncovering what happened to young Miss Ambrose by two different generations of women, who happen to be aunt and niece.

In 2002, Felix, an androgynous mostly comfortable gay young woman, is out partying one night with her friends when she is attacked on her way to her car — in mostly gay-safe

Los Angeles. This throws her life and her outlook into a tailspin. She resists then accepts her mother’s suggestion to visit her aunt out of town until she can get it back together. Something of a city versus country life clash is certainly
bound to ensue as she drives off in her lavender Beetle for rural Lilac Mines.Felix’s maternal aunt is Anna Lisa Hill. Her history in Lilac Mines is both simpler and rougher than Felix can understand, so they each give the other a wide berth for much of the book. In 1967 Anna Lisa went looking for

San Francisco, and others like her — The Girls of 3-B, inspired by one of her lesbian pulp novels. The bus stops in Lilac Mines. She encounters the mystery of Lilac Ambrose, and a nascent but growing community of gay women living in an old church as a commune. This was the beginning of feminism, the exploration of female power, and the core of the butch-femme period, where the dichotomy was strictly adhered to among women who loved women. Anna Lisa becomes “Al” and establishes a life, working in the local wood mill, and loving Meg, one of the other women in the group. Though all is not perfect, it’s home, until “Al” must become Anna Lisa once again and return to her family when her father falls ill. She doesn’t return for years, marrying instead to her parents’ wishes, avoiding children, and living falsely until news of Meg’s suicide wakes her to return to Lilac Mines, now literally becoming a ghost town. The mill is closed up, everyone is leaving, and in  a very short time, Anna Lisa is the only soul for miles. She even has to go to neighboring Beedleborough for her mail when mail service stops, where she gets a job in a small diner. That gives her the experience though to open her own roadside baked good stand and eventually she becomes a cornerstone of Lilac Mines’ rebirth when she opens a small bakery near the town’s center.The reader experiences the revelations of both Felix and Anna Lisa’s life in the present tense. The immediacy of the approach draws the reader in deeply and quickly. The detail is rich and real. The narrative voices are authentic for both Felix and Anna Lisa. And as Felix and Anna Lisa, separately in their own eras, uncover more and more about Lilac Ambrose’s short life that inspired a town, they become inspired to recreate their own lives with purpose and meaning unique to them. Felix is at first appalled that Anna Lisa doesn’t seem to be out. When they finally come together and their stories merge, when Anna Lisa actually relates her story — and the parts of Lilac Mines’ history that she only heard second hand while she was married and away — the reader gets the sense that the clash is finally transforming to a mesh instead. The generational gap is closing, bit by bit.

The long stretch of story Anna Lisa learned second hand — the experiences of Meg and the others in the commune while she was away and married — is told in present tense as well as from Meg’s point of view. This was jarring after it being pretty firmly established for more than half the book that the narrative voice was being passed back and forth between only Felix and Anna Lisa. It’s set off as the beginning of “Part II” in the novel space, but it still felt as though the information could have been delivered in another way. Because it was clearly an experience of the generation that needed to be conveyed to give Anna Lisa’s choices context, it was needed in the story. Just perhaps it could have been presented shorter or via letters Meg never sent and left in her home, or via conversations with the last lesbian couple before they leave town.

The book solidly comes together — just as Felix and Anna Lisa do — in the final chapters. And Felix’s final “here’s what I think happened” in the story of Lilac Ambrose and Calla Hogane, daughter of the local newspaper family, fills the characters and the reader with a sense of accomplishment. Not only has a more than one hundred year old mystery been resolved, but a comfort with their own lives and choices, and each other, has been achieved.

Such is the magic of Lilac Mines, a place where one can be lost, only to be found.