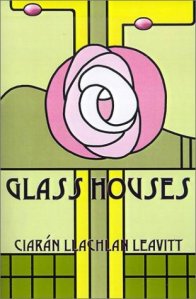 This story is also available under the title Silent Legacy and that’s how I first read it. I remember enjoying the story quite a bit and, since I just finished Tropical Storm by Melissa Good, I thought it was the perfect time for a read of the updated version, Glass Houses.

The published book is now, from what I can tell, out of print but I was told that it, along with other stories by the author, are housed on Melissa Good’s site, http://www.merwolf.com, so off I went. I was already up to the second chapter in Silent Legacy when I got word about the link so I started from the beginning and immediately liked the way the author had rewritten the first chapter. I was a happy camper!

The reason that it’s a good idea to read Glass Houses right after reading Tropical Storm is because it’s sort of based on Ms. Good’s book. Sort of. Jae Cavanaugh is directing a film version of the novel Tropical Storm and Reed Lewis, who plays Dar, has been dubbed the Amazon Ice Queen. Reed’s got some issues – and some secrets. Jae works her way under Reed’s defenses and a friendship ensues. But it’s anything but smooth sailing for these two. And that’s all I’m going to say about that. Except that there are lots of direct quotes from Tropical Storm and discussion of Dar and Kerry so it helps to know their story.

The story is great, I think. I liked both main characters and think the author does a good job of helping us to connect to them and be empathetic to what each is going through. They go through a lot. I would read this one again because the characters felt genuine. Again, not your average woman, but their feelings and thoughts were well laid out for us to experience. Maybe a few too many flashbacks and a bit too much head hopping but still a very good story.

Here’s where I had some problems. Names of characters changing back and forth – the Kerry role was played by a woman named either Gwen or Sarah. The first mention of Kerry Stuart was done with Stewart. In one sentence, instead of the last name of the character, there was “[last name]” because, I’m assuming, the author couldn’t remember it at the time of writing and meant to go back and insert it. Had I paid money for the book instead of read it online for free, I  may have been a little ticked, but I didn’t so I wasn’t. Other than that, it was clear that the author doesn’t live in the US. Again, not a big deal but with the story taking place in Hollywood and the characters being American, the Irish comes through and so many of the phrases are just not those that Americans use. Certainly not a barrier to enjoying the book but something to keep in mind before you start so it can fade into the background more quickly, if you notice that sort of thing. I generally do.

So, do I recommend Glass Houses? Absolutely. If you’re a fan of Dar and Kerry, you’ll love it. http://www.merwolf.com/llachlan/novels/gh/gh1.html