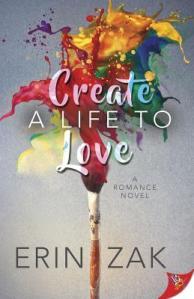 Wow – really enjoyed this one. I wasn’t a fan of Zak’s last book and when I read the blurb on this one I was kind of iffy on it. That should teach me a lesson – this one is going on my 2019 favourites list.

This is definitely a romance – no skulduggery, no ghostly hauntings, no chase scenes or gun play. This one is all about the characters and the relationships and I found myself dragged into their story and left with an “aw shucks” smile at the end.

Describing the plot really doesn’t capture the essence of the novel – a lesbian romance novelist answers the door to find a teen who is actually the child she gave up for adoption sixteen years ago; then the adoptive mother and her daughter show up on her doorstep a few days later, after leaving her abusive husband; slowly the relationship builds between the three and everyone gets a HEA.  Rather than going for the angsty jugular, Zak handles the storyline and the characters with a remarkable amount of maturity and tackles some serious topics without going over the top.

Interestingly, Zak has split the narrative between three first person POVs – Jackie, Susan and Beth.  At first I thought it might be too much, but it gave the whole story a more holistic feel and I was just as interested in Beth’s sections as I was in the two romantic MC characters – even better, Zak didn’t fall in the trap of retelling the same damned scene from each perspective, and the POVs were woven into one another quite well and allowed me to connect with each of the characters and their own personal struggles and growth.

Definitely recommended if you are looking for a good romance with a more unique set up of circumstances.