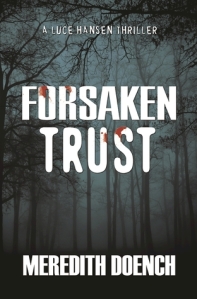 Looking at the blurb for Forsaken Trust, the second in the Luce Hansen series, I think I know why I didn’t read this one immediately when it first came out.  Luce and Rowan are no longer together – I really liked Rowan and I suspect I was angry with Luce for messing things up.  Yeah – fictional characters, I know.  I can hold a grudge for a long time (two years it appears) but time heals all, so I decided to give this one a go after all – and since it seems that Rowan dumped her, I’m not as mad at Luce as I was two years ago.   All that to say – don’t be like me and hold a grudge and miss out on a great follow-on to Crossed.

Forsaken Trust picks up about nine months after the events of Crossed.  If you read the first paragraph of this review, you’ll know that Rowan has dumped Luce’s ass, so things are not going well. On top of the dissolution of her  relationship (and the fact that Rowan kept the dogs), Luce is feeling betrayed by her boss – first by intentionally sending her to Willow Ridge where she was too personally invested and the resulting impacts that the case had on her, and dangling the promise of recommending her for the FBI.   Wallowing a bit – she’s living in a pretty squalid apartment subsisting on takeout and beer – Luce is at loose ends when her boss shows up and assigns her to a new case.

This is primarily a mystery/thriller – focused on the investigation of the murder of four women in a small  town that is struggling with the economic downturn and the opioid crisis.  Yup, another serial killer is loose in Ohio and Luce is on the case.   The four women are older, former addicts who are linked by a mysterious tattoo on their wrists.  As the investigation progresses, Luce runs into more and more walls as the small town’s residents keep their secrets and there’s a definite feeling of fear among those who seem to know more than they are willing to tell.   The secrets lead to deeper and more hidden crimes and the body count rises – it’s a bit like an old Law and Order episode where the investigation starts with one crime but quickly vectors to something seemingly unrelated but also more deeply disturbing.   The pacing works well with Luce’s piecing the information together to form the larger picture and implications.

Doench’s writing is top notch – there’s an authenticity and realness in her depictions of the seedier side of the town and inhabitants and she inserts a grittiness to the the crimes that involve women who have been victims for far longer than just the moment that they were murdered.

Although, the level of introspection in this book isn’t as deep as it was in Crossed  – Luce isn’t intimately involved with the case and she’s settled quite a few of the demons from her past – this is still an interesting character study of Luce.  The focus and drive we saw in Crossed is still there as she refuses to take the easy explanation and close the case – her intuition and logic pushing her to dig a bit deeper and further into what is really going on.  She also still has quite a bit of her shit to get together.

If you’re looking for a romance or even a romantic thriller, this is likely not the book for you.  In both Crossed and Forsaken Trust, whatever sex there is is a fade to black kind of scene which is perfectly fine in the context of the story lines.  There are a couple of viable romantic interests in the second book- the cocky rookie and the attractive medical examiner – but they lend more to further delving into Luce’s character through her actions and decisions and how she’s trying to manage relationships better than she did with Rowan.

Overall,  I think that Forsaken Trust was a stronger mystery/thriller – it’s more intricate and realistic; but, I missed the level of depth we got from Luce as she struggled with her past and present.   Each on their own merits is a great read.

If you’re reading the book I’d almost recommend you skip the epilogue as I found it a bit out of sync with the rest of the book.  It was almost like Doench had decided to end the Luce series with this book (luckily that is not the case and two years later we have Deadeye to continue Luce’s series) and tied any loose ends up quickly with a bit of a HEA.    It had a bit of a rushed feel to it and seemed that Luce was laundry listing everything that happened in the next couple of months.   It wasn’t bad – but it was a weird fit with the rest of the book.

Forsaken Trust could be read as a standalone – but there are references to the Willow Ridge case and Luce’s past.  If you have reader OCD, read them in order.  If you’re not up for reading a really good crime thriller, you can skip Crossed but … you’ll be missing out on a great book.