MEC reviews After the Summer Rain by Gerri Hill 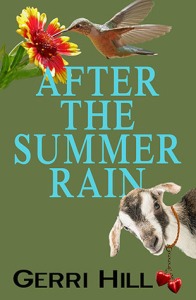 After the Summer Rain – Gerri Hill

Hard to believe, but this is the first contemporary romance by Gerri Hill that I’ve read.   Over the years, I’ve picked up some of her mystery and crime stories as those were the ones that caught my eye.  I enjoyed some, was disappointed with others but never really gave a second look at her romances.  Romance, schmomance.   What do you know, I just finished After the Summer Rain (devoured it in less than a day) and it turns out that I should have been reading her romances instead.

After the Summer Rain is a wonderfully heartfelt romance that avoids all the angsty drama-filled tropes you often find in romances.   This is all about the characters  and Hill brings Erin and Melanie to life with a remarkable level of maturity and honesty.

The novel begins with an intervention – Erin Ryder has spent the last 18 months driving herself harder and harder with work, allowing it to consume her by slowly destroying her health and her relationships with those around her.  Her father and sister issue an ultimatum –  Erin needs to take a complete break for three months or she will lose her job.  She’s packed off to spend three months at an  isolated ranch in New Mexico run by a group of aging lesbians who had originally set up the 700 acres as Womyn’s country and now offer guests an opportunity to stay in an environment that offers little distraction and lots of opportunity for introspection.

At 37, Melanie West is the youngest resident on the ranch.  When she arrived, she was looking for a refuge to heal, her life spiraling in a pattern of self-destruction, guilt and regret.  Seven years later,  she’s established a life on the ranch with a small house and garden – living self-sufficiently and content with her own company.  Independent, calm and measured, Mel is a wonderfully solid character – but the ghosts of guilt and regret  fuel her need for privacy and isolation. With some reluctance, she takes her turn in hosting Erin during her three month stay.

The relationship grows organically with no hint of insta-attraction or insta-love.  Neither one is looking for a relationship or even a friendship – but with little outside distraction, both women begin to form a natural friendship based on sharing both physical labour of maintaining Mel’s homestead and emotional support as they both examine and talk about   what has brought them to the ranch.  The conversations between the two are frank and honest.  There’s a nice balance between the two women – Erin needs the quiet and calm of the ranch to realize what has driven her so hard and for so long while Mel needs the presence of someone who will listen and accept.    By the time that they begin to acknowledge an attraction there’s a wonderful sense of intimacy and vulnerability between the two – they’ve shared so much emotionally that progressing to a more physical relationship is natural and wonderfully portrayed.   There’s some trepidation and hesitancy  but the emotional connection is almost tangible.

The pace is relaxed, fitting with the setting, and Hill takes her time in building both the characters and their relationship – despite there not being a lot of exterior plot drivers I never found the story dragging or boring.  Mel and Erin were more than enough to keep my interest and Hill reveals more about each character’s past as the story progresses.   I really enjoyed this one.

All in all – a really great romance.

Thank you to Bella for providing an advance copy for an honest review.  This book will be released mid September 2019.