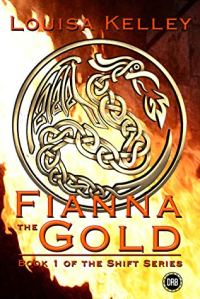 This is the first in new series by Louisa Kelley but it can be read as a standalone.  Thankfully, Ms Kelley didn’t end this on a cliffhanger or with any major unresolved threads that would leave a reader throwing a book across the room in frustration and grimly marking down the days on the calendar for the next book’s release.   <ahem> Not that I’ve done that … recently.

Fianna the Gold is an original and inventive urban fantasy with a heavier emphasis on fantasy.  Rather than going down the werewolves living among us  – either in secret or  “out” – story line, Ms. Kelley has decided to go big or go home.  With dragons.  Total, kick ass dragons.

There’s a lot of fun in this book – having dragons as the centerpiece means a completely different set of personalities and cultures that isn’t all about the Alpha and dark broody animal magnetism.  Dragons are a craftier sort – and I don’t mean they crochet.  They’re closer to tricksters – cocky, confident, sly and a tendency to hoard jewels.  It’s a nice change of pace and gives a fresh twist to the story.

Abbie’s always been a bit of loner. She has a hard time finding friends or holding down a job – the oddest things always seem to happen to her and she’s got sticky fingers when it comes to shiny valuables.  During an ill-advised solo camping trip (she got ditched by her so-called friends) and taking magic mushrooms in order to try to figure out why she has her own personal Box of Weird that keeps messing up her life, she’s confronted by two armed men with less than savory intent and as her anger rises, things get … weird … and hot, but not in a good way.  She manages to escape and finds herself lost in the woods, naked and with no clear memory of what happened.  Luckily she happens upon a remote cabin and when she wakes the next morning, she meets the oddest women – Fianna, Guin and Orla – who entice her to stay for a bit with a day-long poker game.

Abbie is an engaging character – she’s got a great sense of humour and a definite penchant for larceny, gambling and getting into trouble (even as she acknowledges that her decision-making may be a bit poor at times – solo camping and mushrooms? – but she owns it, and she does end up in some rather interesting situations)  How could you resist?   Hints of her dragon nature have been bubbling up from her subconscious for years – her love of gambling, a stash of purloined gems, it all adds up.  Finding out she’s actually a dragon shifter is actually a pretty easy revelation for her – of course, when you shift into a big ass dragon and knock out the side of a cabin, it’s kind of hard to deny.  But Abby takes to it with a child like wonder and happiness – maybe that Box of Weird was a good thing after all.    There’s a great dynamic between Abbie and her sister-self – once they both acknowledge one another, with the dragon self being a bit grumpy and pushy and Abbie giving it right back to her.

Fianna, although the namesake of the book, is a bit harder to connect to.  She’s been sent to Portland to find Abbie as a means of atonement for a misstep when she was training young dragons.  She’s strong, noble and obviously knows what she’s doing.  I’m not saying Abbie could do better, but I would have liked to see a bit more of Fianna’s personality and more of a romantic build up (this was kind of an insta-attract/bonded mate whirlwind romance).

My one quibble with the book was the use of magic through the book – Draca magic was never really explained or rules laid out, it just seemed to be used to smooth out whatever gaps there might have been and used for just about anything from filling a stew pot to .  It was just a bit too powerful and too easily wielded – if they could use magic like that, how could the humans ever be a threat to dragons (big, flying, toothy dragons) who have seemingly unlimited magic?

Based on the “Book 1 of the Shift Series” subtitle, there will definitely be more coming in this series and I’ll be interested to see where Ms. Kelley takes us next.  The first book is a self contained story and you won’t be left hanging but there’s lots of possibilities hinted at – a book set in Draca or maybe following the idea of more Draca youth “visiting” Portland,  what about Myriam … and Guin who was left behind to keep an eye on things … or the unnamed techno-Draca?   Like I said, there’s lots of things to explore with a fresh and new perspective of dragon shifters and I look forward to seeing what’s coming next.

Thank you to Dirt Road Books for an advance copy of this book.